Bicycle History: The Road to the Electric Bike 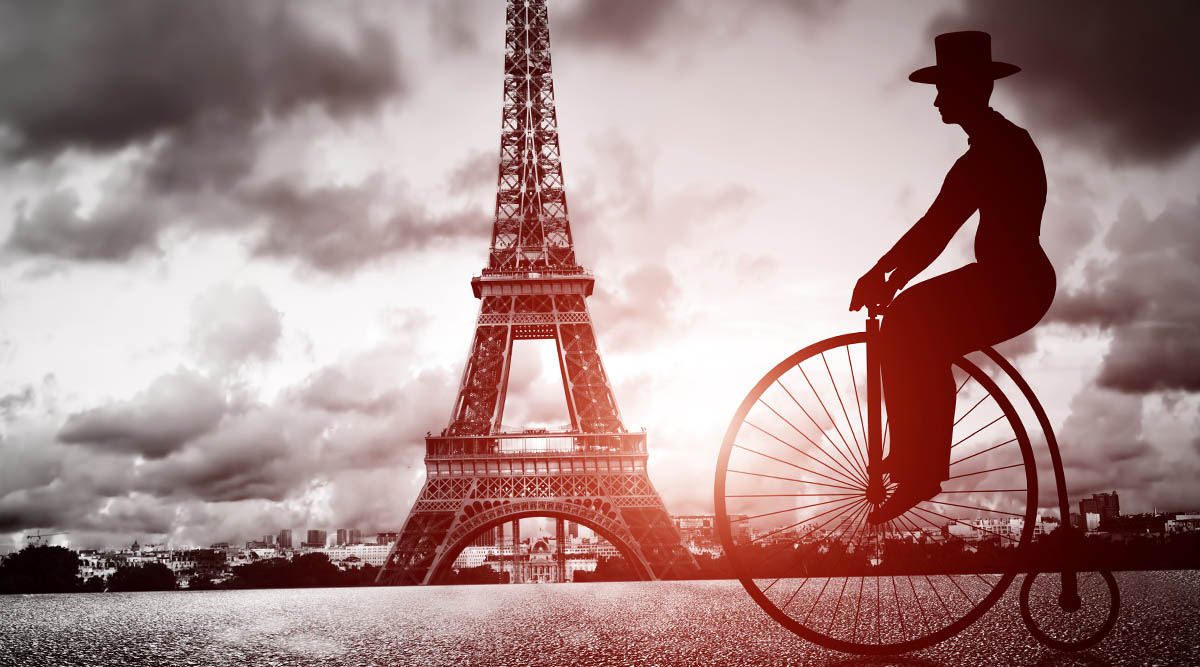 The bicycle to electric bike are such an integral part of our everyday — whether we’re riding them or just seeing them being ridden — that it’s pretty wild to think that they were invented just 200 years ago. That makes them newer than the White House and more recent than the state of Mississippi (and 19 other states, for that matter). But they’re actually not a product of the U.S.; it was in Germany, in 1817, that Karl von Drais first introduced the “laufmaschine” to the world.

From Dandy Horse to Electric Bike

You may have heard it called the dandy horse, hobby horse, or draisienne (that’s French), but regardless of the name, the laufmaschine was the predecessor to the bicycles we know and love today. It also started a fascinating history full of innovation and design, eventually leading us to electric bikes and electric bike conversion kits of the 21st century (but we’ll get to that later).

Now, we call the laufmaschine or dandy horse the predecessor to the modern bicycle because it featured two in-line wheels, handles and a seat. But it also lacked just about everything else today’s bikes have. Chain drive? No sir. Gears? Nope. Brakes? Forget about it. The name laufmaschine is actually German for “running machine” because it also lacked pedals. That’s right, this 19th-century marvel was foot-to-ground powered.

Jump ahead a few decades, travel about 300 miles west, and you’ll find yourself in 1860s Paris where the laufmaschine gets itself some pedals and a name change. “Velocipede” became the name of choice (which can also be used to describe any human-powered, wheeled vehicle, e.g. unicycles, tricycles, etc.), and as for those pedals, they were added to the front wheel — Frenchmen Pierre Michaux and Pierre Lallement are credited with the breakthrough, coupling the pedals with a crank drive system on the front wheel hub.

Quick side note: Leeds E-Eike Conversion Kits also utilize the front wheel hub, but in a much more sophisticated way (no offense, Michaux and Lallement). Check out Leeds Electric Bike Kit to see its front and rear electric hub motors.

It was Michaux and his family that are also cited as the first to commercially manufacture the pedals-and-all velocipedes. Because the vehicle’s wood and iron construction wasn’t terribly comfortable, though, this velocipede earned the nickname of “Boneshaker” (cobblestone streets, no shocks, you get the picture). The Boneshaker stuck around through the 1860s, and then a new ride rolled into town. 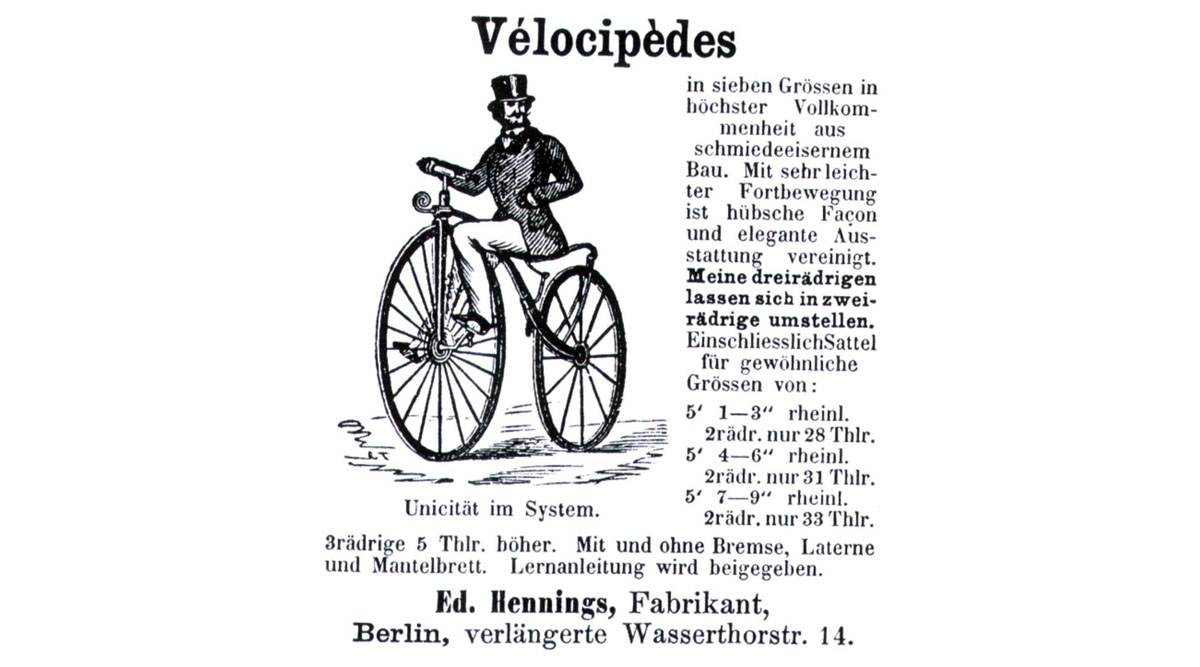 You’ve probably seen these in old-timey photographs and silent movies — huge front wheel, tiny back wheel, a man in a top hat riding head-and-shoulders above pedestrians as his suit tails flap in the wind. That’s a penny-farthing. Amongst its features were rubber tires (goodbye bone-rattling iron tires!) and mustache handlebars — top hat sold separately.

Fun fact: The name “penny-farthing” refers to the English coinage of the same names, the penny being a large coin and the farthing being rather small in comparison, just like our bicycle’s wheels. That name, however, wasn’t used at the time. Instead, this is where “bicycle” replaced “velocipede” — probably because it doesn’t sound like a strange insect or dinosaur. If you dive into more bicycle history articles, you might also hear the penny-farthing called an “ordinary.”

Now, the reason behind that huge front wheel — beyond a less rigid ride and an elevated view — was because of the bike’s front wheel direct drive. The bigger the wheel, the more distance achieved with every pedal rotation. Pretty smart, right? (Wonder what they’d think of e-bike conversion kits’ pedal-rotation-to-distance-achieved ratio.)

Although the penny-farthing improved on comfort and speed, it was at the cost of safety. Just imagine hitting a rogue cobblestone and being thrown over the handlebars from around five to six feet up. So it makes sense that the next big milestone in bicycle innovation would’ve been to introduce something safer — and hey, why not call it “safe” as well? 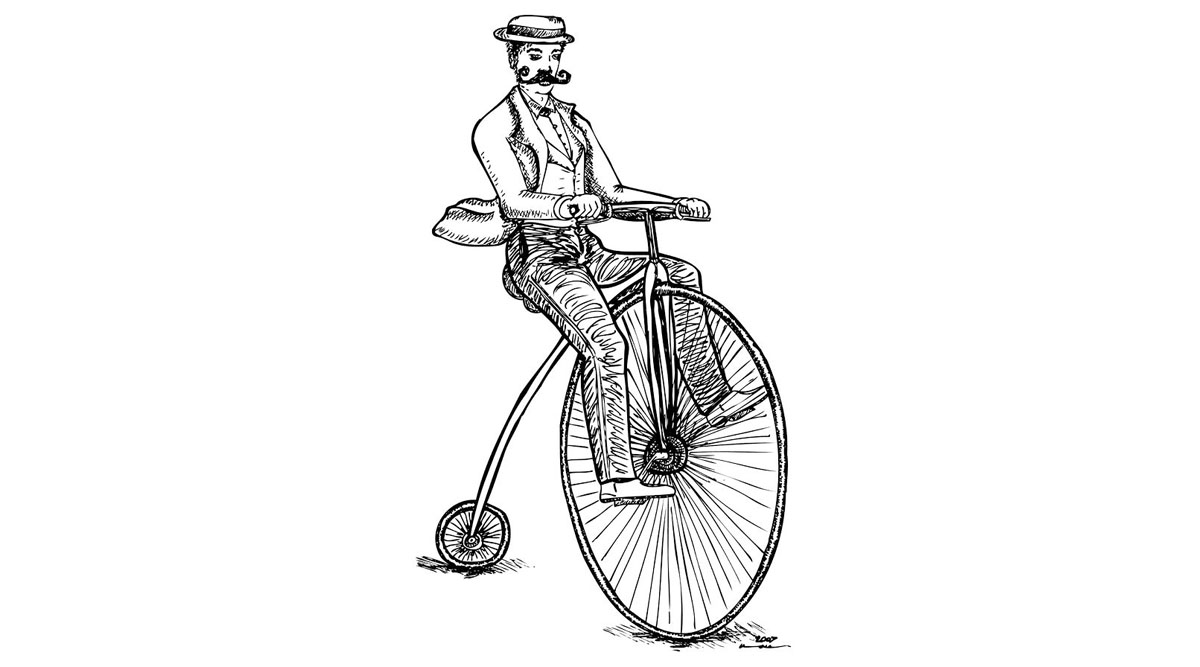 In the 1880s, John Kemp Starley began manufacturing the Rover Safety Bike in direct response to the riskier penny-farthing bicycle. (It was Henry John Lawson who took credit for the first viable safety bike design, though, back in the 1870s.) With its same-sized wheels, diamond frame, chain drive, and pneumatic tires, the Rover Safety Bicycle is the direct ancestor of modern bikes and the start of an explosion of bicycle popularity.

From the 1890s onward, bicycles were no longer just toys for the well off; They became a mode of transportation to, from and during work. They were accessible to women (try getting onto a penny-farthing in floor-length skirts). They caused an upsurge in bike racing and competition. In less than a century, bicycles went from a novelty item, to an everyday essential for many people. And the innovations just kept coming. 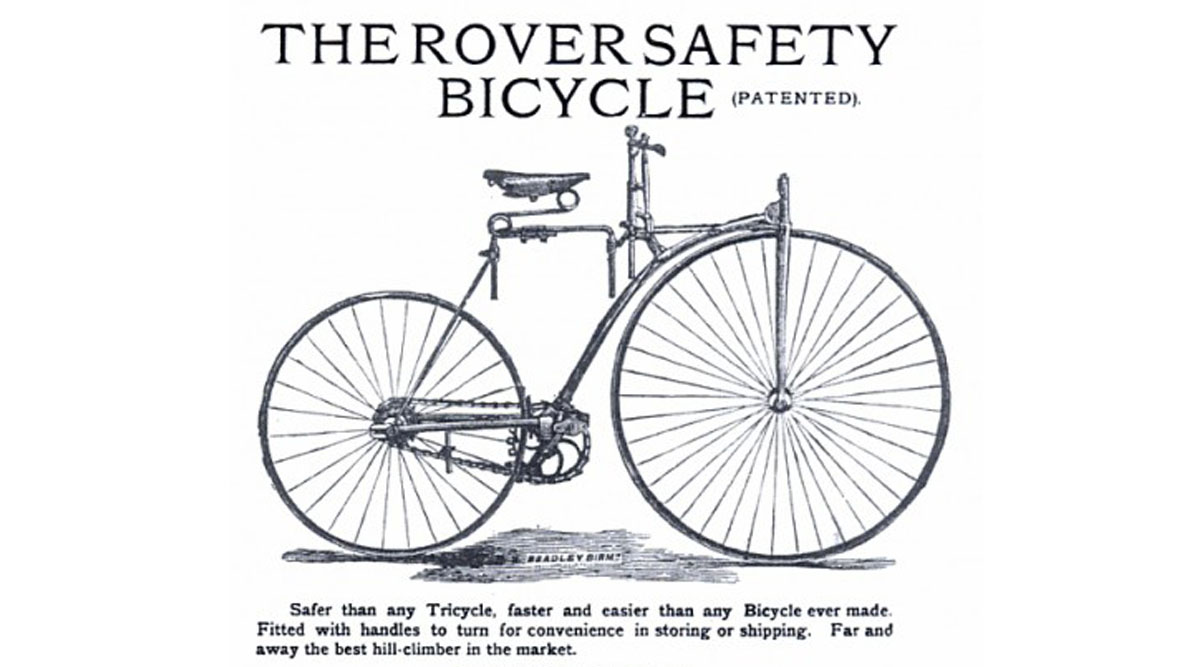 The first steam-powered and motorized bikes were in the works throughout the mid- to late 1800s, and in the 1890s the first patents for electric bicycles were issued.

Then along came the 20th century, bringing refinement to racing bicycles, new construction materials (goodbye steel, hello aluminum), and the introduction of road bikes, mountain bikes and BMX, just to name a few.

Amongst all the changes, though, it’s the advent of electric bikes that marked the next stage, of sorts, in bicycle history — not unlike what the Safety Bicycle did 120 years ago. As mentioned before, the first whisperings of an electric bicycle came way back in the late 1800s, when the light bulb was still in its infancy and Tesla and Edison were still competing over AC and DC power systems. Now jump ahead a few decades … and a few more … and you’ll arrive in the late 1900s when things really started cooking for electric bikes. Why? Here are a few reasons that come to mind.

Batteries got cheaper. In the 1990s, lead-acid batteries (the oldest type of rechargeable battery) and nickel-cadmium batteries (NiCd) were being replaced by nickel-metal hydride (NiMH) and lithium-ion (Li-ion) batteries. (Whew! That was a mouthful.) All this was thanks to a boom in consumer electronics — think computers, cell phones, digital cameras, etc. Increased demand meant increased supply and a subsequent drop in prices. In other words: affordability.

Batteries also got lighter. Those new-batteries-on-the-block were not only cheaper but lighter, too. That made them great for consumer electronics, and excellent for electric bikes. For a comparison, an electric bike lead-acid battery (also called an SLA) weighs in at anywhere from 15 to 25 pounds, while a 24 Volt li-ion battery from Leeds weighs a mere 4 pounds. Less weight = more speed and longer-lasting battery life. We’ll take it.

Technology developed. A couple things worth noting are:

This is by no means an exhaustive list, but it can give you an idea of what helped give e-bikes their boost in popularity. And as a quick aside, let’s give credit where credit’s due: if not for the reworking and evolution of e-bikes and electric bike motors throughout the 20th century (not just the 1990s), there wouldn’t have been the breakthroughs during the decade of grunge music, horrible hairstyles and baby-boomers, which time brought e-bikes out of obscurity.

But here’s the thing about consumers: they always want the next best thing. With electric bikes, it wasn’t enough to just have your basic, more affordable, lighter weight, design-marvel of a bike. There needed to be a high-end, top of the line option. Options, really. And over the past decade and a half, those primo e-bikes have been in high demand, to be sure.

What’s a few grand when you can be riding on the bicycle equivalent of Matt Damon? I.e. Environmentally conscious, good looking, Academy Award winner — wait, scratch that last one. But remember how consumers always want the next best thing? Turns out it isn’t the Matt Damon-esque, high-end electric bike. Rather, it’s the electric bike conversion kit. (Which is, for the sake of our analogy, the bicycle equivalent of your favorite actor/actress, because once you see how ideal e-bike kits are, you’ll be hoping they cast one as the lead in the next block buster film.)

For your reading pleasure, here are some key reasons why e-bike conversion kits trump regular electric bikes (and every other mode of transportation, for that matter), and why the demand has increased exponentially over the past few years: 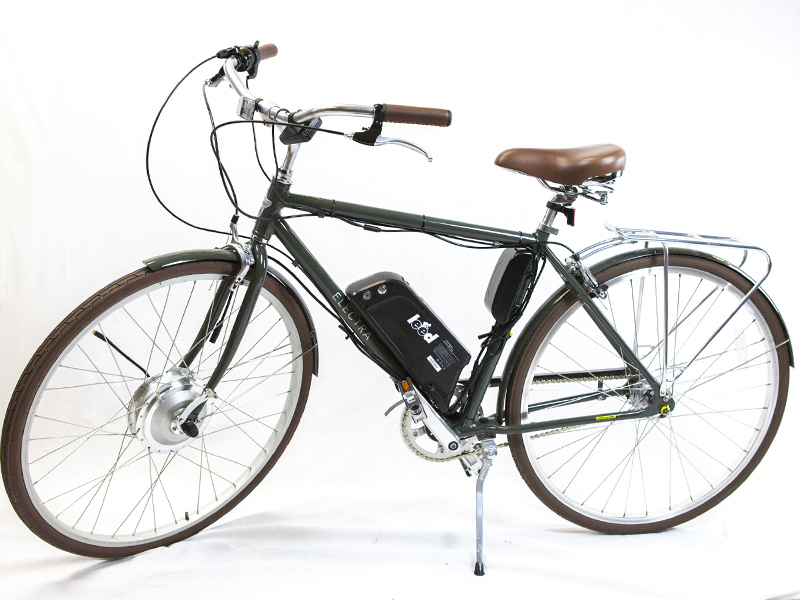 Electric bike kits convert your existing bike into an e-bike. You’ve got a perfectly good bike in your garage. The seat is just the right height, the cushion has the perfect firm-to-plush ratio, and the handlebars are basically molded to your hand shape. Why replace a relic such as this? You don’t. You take an e-bike kit and turn it into the commuter/recreational vehicle of your dreams. With a 250 Series Leeds E-Bike Kit, it can take as little as 5 minutes. Really. We send you a new front wheel — complete with hub motor — and walk you through the rest from there.

They’re customizable to your needs. And should your needs change, you don’t need to buy a whole new bike. Swap out the appropriate components and you’re good to go.

Commuting is a whole lot more fun. Maybe you bike to work old-school style. Maybe you drive or take the bus. Either way, your commute could use an improvement, and e-bike kits provide it. For traditional bikers, you’ll no longer get to work sweaty — and you’ll get there faster, too. For your drivers or bus-hoppers, you’ve got the most to gain. Keep reading.

E-bike conversion kits add power to your cycling. But only if you want it. Go ahead and kill the hill with only the strength of your own two legs, or kick it into Lance Armstrong-stage with your e-bike motor. Plus, as you pass people, there’s a good chance they’ll have no idea you’re on an electric bike — the looks on their faces as you whip on by is just icing on the cake.

You can get and/or stay healthy. So many people — of all ages, fitness levels, shapes and sizes — use electric bike conversion kits to lead active lives. For some, it’s been the only way they could stay active, because of injuries or weakened physical ability. Whether you need a lot of assistance or a little, it’s there for you. And hey, e-bike kits are a lot more fun that hanging out in a windowless gym, that’s for sure.

You’re helping the environment. We don’t need any charts or statistics to tell you that there’s been a major shift toward green living in recent years. And electric bike conversion kits fit seamlessly in that world: You get cost-saving and health benefits, while you also give back to the earth. Feels good, doesn’t it?

There you have it, a quick look at the history of bicycles — from the laufmaschine, to the safety bicycle, to the electric bike conversion kit. We’ve come a long way in two hundred years — where to next?