Video | Is Riding an E-Bike Cheating? See the Data

From time to time we see comments from cyclists on our Facebook page and others’ Twitter feeds that contain negative sentiment toward electric bikes. The negative commentary includes statements such as “that’s cheating,” “get some real exercise,” “it’s just a motorcycle,” “lazy people,” and more. I often cringe when I see “cheating” comments.

#Ebike cheating because it is a competition out there? To do what? Work the hardest or suffer the most to get from A to B? How Puritanical.

We understand there are misconceptions about ebikes. Embracing new technologies often takes time because we as humans naturally have cognitive biases based on our subjective social realities gained through life’s experiences. These perceptions, however, often dictate our behavior.

We want to help change these perceptions toward electric bikes. Those who post comments containing negative sentiment on social media about e-bikes demonstrate these cognitive biases. But, what we’ve discovered about these commentators is quite shocking.

There is irony in these negative comments on our Facebook feed. Why? Because we only advertise our Facebook posts to Facebook users who have previously “liked” an electric bike page such as Electric Bike Report. At some point, these commentators have “liked” electric bikes on Facebook. Facebook’s algorithm stores their clicking data and publishes electric bike posts to their feeds. Despite their negative public sentiment, their previous clicks reveal their “likes.”

IS RIDING AN E-BIKE CHEATING?

Most of us ride electric bikes for different reasons, but never to “cheat.” For example, my foot was crushed in an accident back in 2011 and an electric bike keeps me actively commuting. Without an electric bike I just couldn’t ride a bicycle like I used to. Wounded veterans have found electric bikes on their path to recovery and beyond. That is one of the reasons why we work with veterans organizations to help keep veterans actively riding. 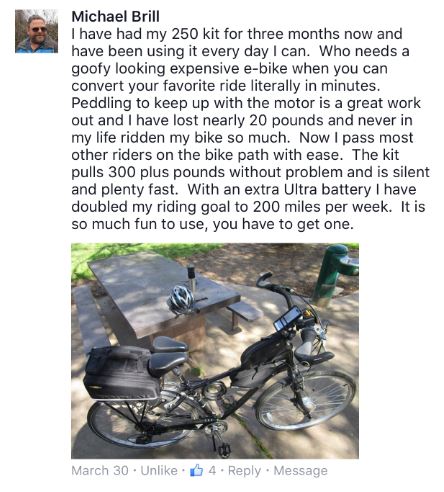 Perhaps many of us were cycling altruists at one point. But once we recognized the opportunity, we jumped on the electric bike wheel. Some, however, still view electric bikes as a weakness. We understand these perceptions and their social realities will change whether they wait until middle-age, retirement, or perhaps face an injury. We’re still waiting on John Josefson to come around… 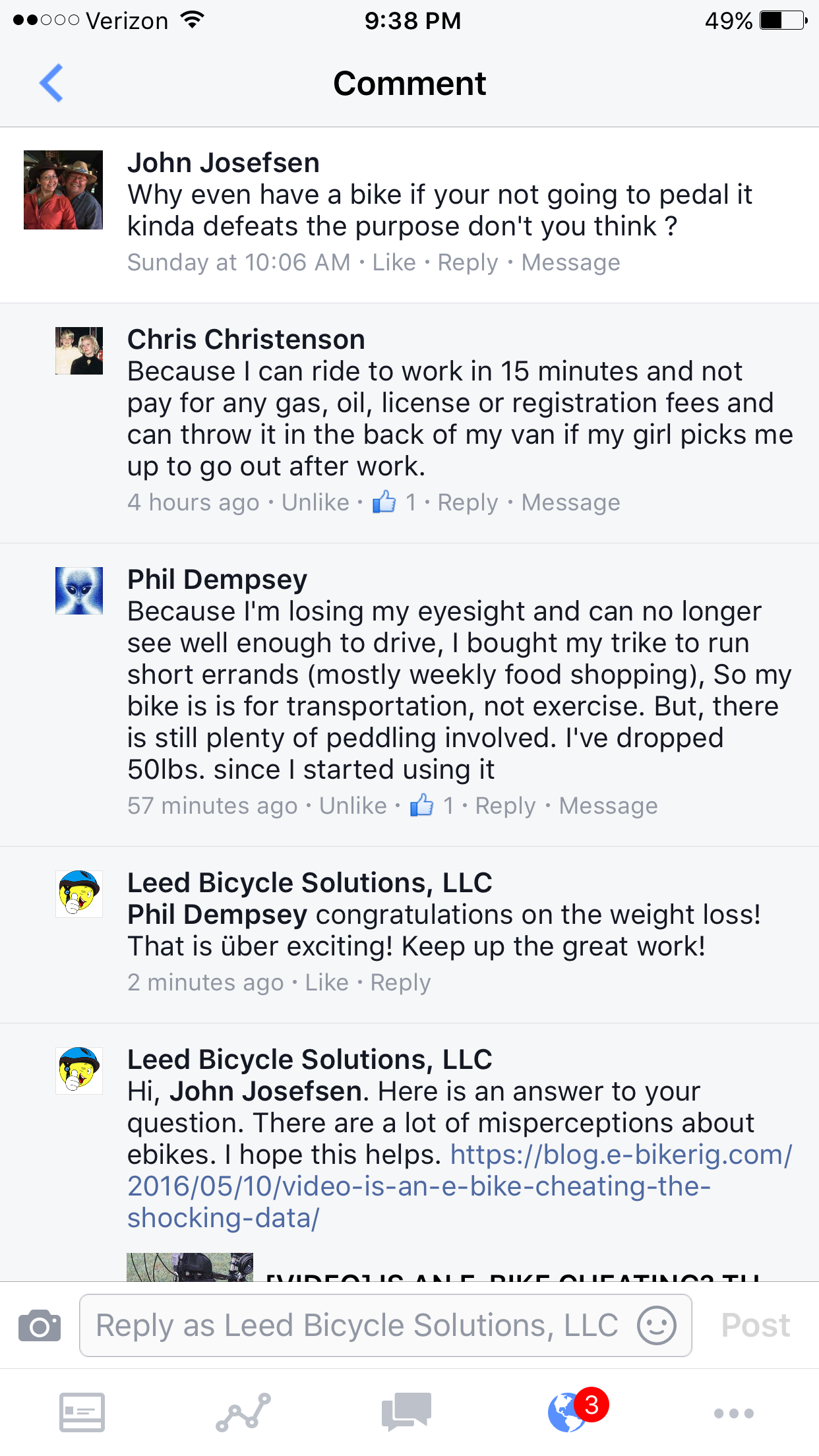 Waiting until an electric bike becomes a necessity, however, is not necessary. Electric bikes benefit everyone at any age and ability. So let’s take the cheating argument head on and present the data that conclusively eliminates the perception that “electric bikes are cheating” once and for all.

Let’s look at some research from 2015. The University of Nebraska Omaha’s Exercise Physiology Department published a study that should have ended the debate once and for all. Their research concludes:

(1) The actual amount of energy expended by the [electric bike] riders was nearly identical for both modes: electric-assist and manual.

(2) The biggest difference was in the time it took to complete the circuit; on average riding the eBike took around 1 minute less than in the non-electric mode.

(3) Significantly, all the riders rated their perceived exertion (RPE) using the ACSM’s scale as being easier using electric mode made. If riding the bike in manual mode was rated 15, riding it in pedal-assist mode was a 10. That’s a huge difference in rider perception between the two modes.

The study showed that the energy expended was nearly identical for the cyclist and the electric cyclist. The difference was in the perceived exertion. The subjects in their tests perceived that they were not working as hard, but they were! They were exerting as much energy when they rode the electric bike but the result was a quicker commute.

Some people have to experience an electric bike in order to recognize this cognitive bias that creates a false perception. In this sense, choosing to not ride an electric bike on the premise that it is cheating is akin to intentionally decreasing human efficiency. It would be similar to intentionally increasing wind resistance on a vehicle, intentionally buying the heaviest running shoes available, or purposefully increasing your drag on a swim in order to avoid the perception of “cheating.” These ridiculous examples are based on the assertion that improving human efficiency is “cheating.”

At 35 years-old there are few things I find more enjoyable than cruising past vehicular traffic on my e-bike day in and day out. My bicycle commute helps me dominate at work. Those of us who commute by bike know exactly what I’m talking about. If you don’t commute by e-bike, then it is time you seriously consider making the change. It will add years to your life, save you more than $150,000 during a twenty year career, and help you lead from the front at work.

Let’s ditch the qualitative approach that simply expresses our sentiment. Let’s appeal to emotions supported with logic; a mixed methodology of opinion from our experiences backed with solid data. This may convince others that electric bikes today are as important as the steam engine, the Model-T, and the Wright Flyer once were.

Let’s mix this up a little by offering an e-bike cyclist’s experience supported with quantitative analysis. Now this is not a dissertation of mixed methodological approaches to electric bikes. This is simply a fellow who commutes to work with an electric bike and uses technology to report his findings.

Paul Willerton recently published an article on Electric Bike Report containing the data to convince us that electric biking provides the same health benefits as regular bicycling. His data also proves that electric bike commuting gets you from point A to point B quicker than driving the car to and from work during high-traffic times as well as offering significant cost savings.

Electric bike commuter Adam Alter logged 5,452 miles on ebikes and traditional bicycles rotating between these bikes daily. He kept consistent data on average speeds, commuting times, rider Watts, distances, and heart rates. His commute was approximately 20 miles to and from work. He rode a Stromer ST2, Focus S10, Cervelo R5, and Specialized Sirrus. The first two bikes are electric bikes and the second two are not.

“Moving to the eBike added almost 7 mph to my ride. My body worked the exact same but for a shorter duration.”

The results: Adam averaged almost 7 mph more riding electric bikes. That dropped his daily commute down by almost an hour on average! What would you do with an extra hour each day? Considering 80% of Americans sit in traffic on their commutes, this represents an opportunity for each of us to spend more time with our families and improve our health without having to sit in a car.

Additionally, an electric bike, according to Adam’s data, helps him get in a significant workout to and from work. His electric bike is his gym on wheels. His heart rate was in the same zone riding a bicycle and an electric bike. He controls his heart rate by pedaling faster or slower. He is the master of his workout and can choose his exertion versus the bicycle and terrain dictating the terms of his effort.

“I’m very busy at work, and try to get as much time with the family as I can. With the eBike, I found I can still get great exercise, but actually move efficiently in 30mph zones while carrying all my commute and work gear.”

Over several months Adam alternated bicycles. He knew he was getting a similar workout regardless of the bike, but he wanted to prove it with a heart rate monitor and other sensors. Adam Alter is the ultimate altruist-cyclist-electric-bike convert. 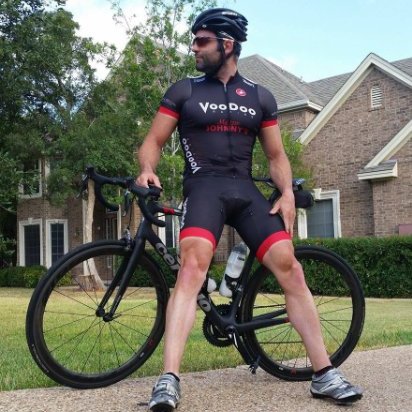 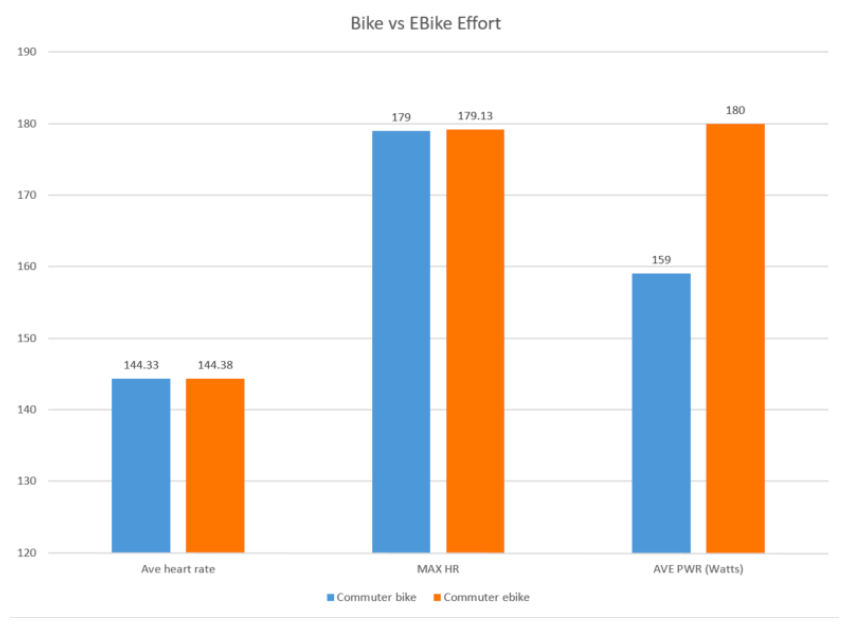 “I basically had the same intensity regardless of the bike I was on, as reflected in my heart rate average and max nearly matching perfectly.”

It could be argued that statements claiming an electric bike is cheating are similar to allegations that someone’s “aerodynamicness” is cheating, decreased body weight is cheating, shaved legs are cheating, or that driving anything less than a Chevy Suburban on the highway is cheating.

Of course an electric bike should never be used in a non-electric cycling competition. That would be cheating. We merely wish to present the irony of arguing against increasing human efficiency to commute, improving public health, and seeking alternative means of transportation in a world where the majority sits in traffic by themselves in a 5+ passenger vehicle to and from work everyday.

This is some of the most convincing data we’ve seen that breaks down the pedal crowd’s misconception that an electric bike is cheating. It clearly shows that electric biking is exactly the same as traditional biking in relation to human health benefits. The only difference is an increase in human efficiency when riding an e-bike.

“My average power input was actually higher on the eBike because it cut my commute time down so much I wasn’t destroying my body with over training.” 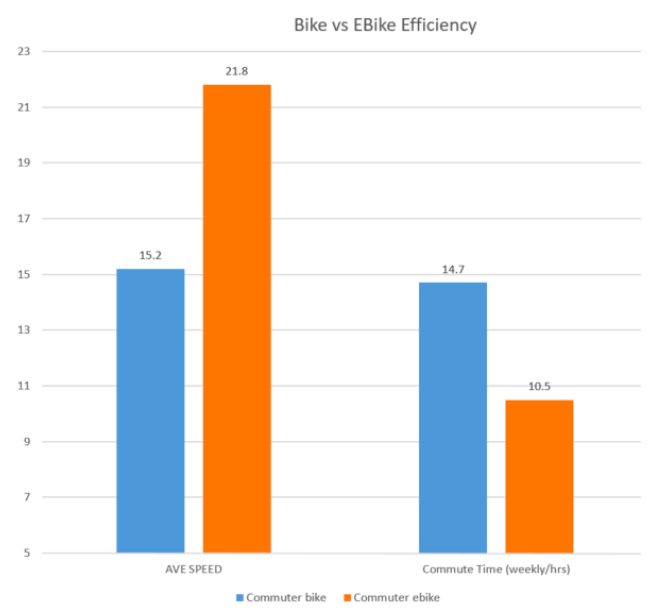 “The five day commute felt more sustainable and freed up more time with family. Still, the 10.5 hrs of intensity each week is plenty to keep me in really solid fitness shape.”

If the numbers are not enough to convince you, then enjoy his video. Adam filmed his commute by electric bike (left screen) and vehicle (right screen). This video contains his entire 20 mile commute. He speeds up the video to shorten its length to only ten minutes , but his cheeky commentary paralleling the side-by-side data is definitely worth watching.

Adam’s data demonstrates the significance and opportunity we have commuting by electric bike. So what will we do with this data? Let’s alter social realities, change perceptions, and let’s start by riding electric bikes today.