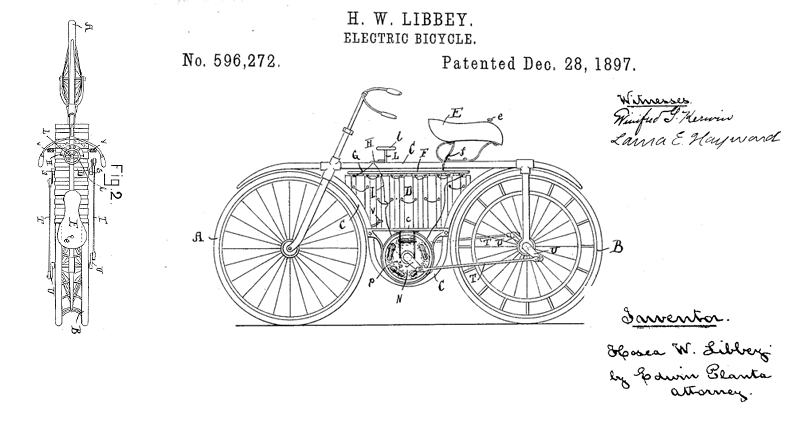 The 1890’s want their electric bikes back! Electric bikes have grown in popularity over the last ten years for numerous reasons, but they are not a new concept. In fact, most of the electric bikes and electric bike motors that we see today on the market were actually a vision beginning in the 1800’s. The “8” in 1800 is not a typo.

Patent filings beginning in 1897 are an echo of today’s best electric bike identities. Let’s take a look at these four innovations and see how they have developed into today’s electric bike concepts.

In 1897 inventor Hosea W. Libbey filed PATENT NO. US 596272 with the United States Patent and Trademark Office (USPTO).

Be it known that I, HOSEA W. LIBBEY, a citizen of the United States, residing at Boston, in the county of Sufiolk and State of Massachusetts, have invented certain new and useful Improvements in Electric Bicycles, of which the following, taken in connection with the accompanying drawings,is a specification.

The object of my invention is to produce a bicycle to be propelled by electricity generated by primary batteries and in motors therefor.

The Libbey Electric Bicycle Patent US 596272 A

Notice the mid-drive system Mr. Libbey envisaged would take bicycle riders into the next century. Isn’t that something? Mid-drive systems balance the bike effectively and create a low balance that makes bicycling more natural. Today, these are some of the best electric bike drives available. But the electric bike did not begin with Mr. Libbey’s creativity alone. You see, The Libbey patent contained novel features from previous patents.

The invention consists of the novel features of the same, as will be hereinafter fully described, and pointed out in-the claim.

My eyes glazed over reading the list of “novel features” found in the patent. So I won’t list them or I’ll lose you here without reading further, but the Libbey patent is an improvement on two other patents from the 1800’s. The 1800’s! Remember this next time you see a new electric bike on Indiegogo or Kickstarter crowdfunding campaigns that alleges novelty!

We are guilty of the same with the launch of our electric bike kits. Yes, our motorized bike kits offer novelty, great pricing, and an improvement upon previous designs, but the fact remains that the idea began more than a century ago. The truth is, inventors from the 1800’s were already dreaming of what we have today before li-ion battery systems and high-tech manufacturing.

If you are a patent attorney or just enjoy reading historical patents, you can view a copy of the original type-printed patent filed with the USPTO here. Today, mid-drives are growing in popularity for the aforementioned reasons, however, an easy installation is out the door and requires a specific type of bicycle and a professional mechanic to correctly install. The mid-drive is a great option and we recommend the 8FUN mid-drive which is available in 350 – 750 Watt models.

Be it known that I, GORDON JOHN SCOTT, a citizen of the United States, residing at Philadelphia, in the county of Philadelphia and State of Pennsylvania, have invented certain new and useful Improvements in Velocipedes, of Which the following is a specification.

This invention relates to an improved means of propelling velocipedes and other vehicles which are usually operated by the rider.

The Object of the invention is to provide means for driving the vehicle at varying rates of speed according to the variation in grades without the ‘use of changeable gearing or the necessity for altering the speed of the pedals. With an ordinary velocipede, unless it is equipped with a speed reducing and multiplying device of some kind,variations in speed can only be attained by increasing or decreasing the speed of the pedals, and with an ordinary gear upon a level road the speed is limited by the inability of the rider to turn the cranks at a very high rate notwithstanding he may have the strength to propel the vehicle at the higher speed with a higher gear. In other words, even though the rider were doing no work there is a limit to the speed at which he is able to turn the cranlIs. By my improvements the crank speed may be kept uniform, while the velocipede may vary in speed automatically according to the grade of the road, and upon level roads very high speeds may be attained with a moderate speed of the crank-shaft.

The Scott Patent is unique in that pedaling is required to regenerate and store power in a battery that would in turn power a rear wheel motor. We receive phone calls almost every day from customers asking if there are motors that “regenerate” power from pedaling. The Scott Patent, as novel as it was and as well-intentioned as it may have been, did not fully recognize natural physics. Friction is required to generate power and in doing so, the friction necessary to create power in this case requires a force against the bicycle’s pedaling power. This counters the efficiency of the bicycle rider’s pedaling force. Today, electric bike motors do exist that regenerate power. This is done through braking, however, the inefficiency still exists. In order to benefit from enough braking a cyclist would need to brake for a long period of time. For example, juxtapose a slow efficient charge of a li-ion battery which takes 2-6 hours to that of the length of time one brakes while riding a bicycle. I may brake a dozen or more times on my 45 minute commute to work on my bike. These twelve times braking racks up a total of possibly 45 seconds at the most. With this math and if my braking regeneration were to be as efficient as my 120 volts at home, I would have only recharged the battery 1%. Obviously, it is not efficient, but Mr. Scott was a visionary and sought the best outcome with his patent which can be viewed here in its original type print.

Be it known that I, JOHN SCHNEPF, a citizen of the United States, residing at New York, New York County, New York State, have invented certain new and useful Improvements in Automobiles, of which the, following is a full, clear, and exact description.

My invention relates to improvements in, bicycles and the like; and it consists in the novel construction and arrangement of the 1 parts thereof herein after fully described.

The chief object of my invention is to provide a means which may be attached to or detached from a bicycle of any ordinary type, which means may be utilized as a primary or auxiliary driving means.

The Schnepf Friction Drive Patent US 627066 A

Unfortunately, the Rubbee has a number of setbacks and has not received great reviews, but the vision of Schnepf echoes today and continues to be improved upon. According to Court at electricbikereview.com, If you are going to go with a friction drive, you should go with the GoPed Go Bike Power Pack. He recommends it over the Rubbee.

In 1938, not long before the United States declared war on Japan and Germany, Thomas M. McDonald filed PATENT US2179418 with the USPTO.

6 Claims. (Cl. 172-287) This invention relates to a bicycle and it aims to provide means electrically operable to rotate or propel the front wheel of the bicycle, so that the bicycle will thus be operable by power.

The McDonald electric bike motor revolutionized the electric bike, though WWII would delay its recognition. Today, this concept is behind most electric bike motors. Whether an electric bike hub motor is installed on the front or rear of a bicycle, this geared motor uses the same idea. The novelty within is its ability to use gears instead of electric magnets which create friction. Notice McDonald’s declaration of novelty.

The geared hub motor allows the user to ride a bicycle with or without power. The gears spin freely without the friction of magnets. Therefore, a cyclist can ride with the battery on or off. This is the concept one may find in Leeds electric bike kits today that employ the new 8FUN motors. McDonald’s original patent filing can be found here.

These four patents beginning in 1897 took electric bikes into the next century and are symbolic of American innovation. Even though the technology has advanced by leaps and bounds, these original concepts continue to drive innovation. Electric bike motor manufacturers are inspired by these innovators and continue to improve upon the legacy of the originators.