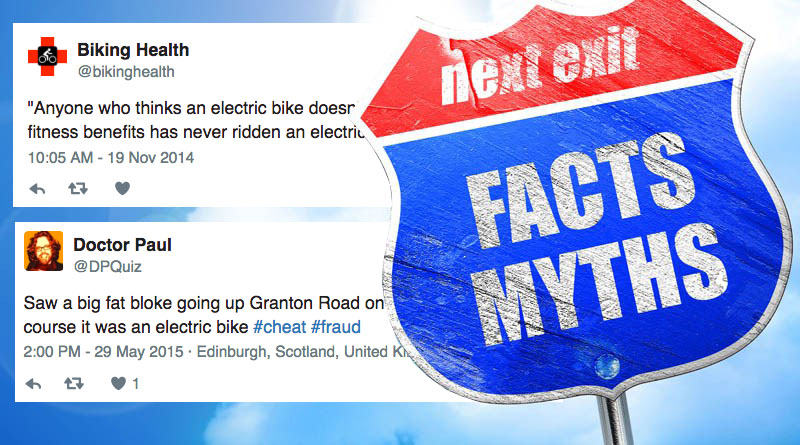 Let’s face it, there is a lot of misinformation out there regarding electric bikes. Let’s set the record straight since the electric bike kit throws a wrench in negative arguments. As an electric bike kit retailer we’ve heard it all, both good and bad. Our customers get it, but what about those who don’t know about an e-bike’s full potential. The truth is many people don’t realize they are very user-friendly and environmentally friendly. But it is easy to understand the misinformation when the electric bike trolls are everywhere in social media.

So we came up with a list to show the debate on Twitter. A presentation of ignorance and logic available in the Twittersphere. Let’s take a look at these myths.

Saw a big fat bloke going up Granton Road on a bike, quite fast. Of course it was an electric bike #cheat #fraud

Saw a big fat bloke going up Granton Road on a bike, quite fast. Of course it was an electric bike #cheat  #fraud

Holy judgmental, Doctor Paul! Let’s think about this here, what if that “fat bloke,” just had knee surgery. He had always been an avid cyclist and wanted to have the potential of getting exercise and using his knee. Heck his doctor highly encourages to ride his bike after surgery, it is a great way to rehabilitate. In a lot of these cases stationary bikes are the number one piece of equipment in physical therapy clinics. So this way he is able to get outside and continue to ride his bike like he did before, is it really cheating? I think NOT!

One more example is Mrs. Lucas is a sweet old lady that uses her trike to get her groceries. That way she can be more independant and not rely on family and friends to always take her to the store. Mrs. Lucas has one hill that she struggles getting up with a full load of groceries to get her back home. She is 76 and has always been able to live on her own. The e-bike enables her to conquer that hill and get her home with the confidence that she needs. Is this cheating? I think NOT!

@bmossop Hilly cities. Electric assist helps u cheat on climb. Also nice for commuters who bike to work, but are tired in afternoon.

Hilly cities. Electric assist helps u cheat on climb. Also nice for commuters who bike to work, but are tired in afternoon.

We couldn’t agree more with the tweet above, but with that said a person can commute with less stress, less sweat and arrive in a good mood. The benefits of a “cheat” ride far outweigh the cons of not getting out on a bike in some fresh air.

While Federal law governs consumer product regulations for “low speed electric bicycles,” as with motor vehicles and bicycles, regulation of how these products are used on public streets is subject to state vehicle codes. There is significant variation from state to state, as summarized here on wikipedia, but the good news is the Leeds E-Bike Kit keeps your bike legal in almost every state. It is also covert enough to keep you under the radar if you so choose to be a covert operator.

@btschiller The state laws are different all over the country, though. My understanding is that any electric bike is illegal in NY.

The state laws are different all over the country, though.

Yes, you can, and yes, you should. You still pedal electric bikes. In fact, you still should. Riding an electric bike is like riding a regular bike, except you have a boost to make you and your ride more efficient.

#madeinamerica Bolt M-1 Electric Bike:
It's still a bicycle. You can pedal it. But the point is you don't h… http://t.co/HHH2ofogjC

It’s still a bicycle. You can pedal it. But the point is you don’t h…

Would love an electric bike. Impediments: Very expensive, no place to ride it, no place to store it. Will have to move first.

Would love an electric bike. Impediments: Very expensive, no place to ride it, no place to store it. Will have to move first.

What is not considered in the expense of the e-bike purchase is the money you are saving on your commute. No more fees for gas and car maintenance. Or flip the coin and say you are using the e-bike for pleasure. Then your overall health gets the benefits. An electric bike is a great investment and the pros far outweigh the cons. We encourage all ages to try an e-bike for commuting or pleasure, or both! Why not combine the two?

Riding an electric bike allows for a safer, more controlled rider experience by never having to out pedal out all with your head down.

Riding an electric bike allows for a safer, more controlled rider experience by never having to out pedal out all with your head down.

The speed and price is probably going to make or break the sale of the electric bike… it’s also heavy..

The weight of the e-bike kit is only an issue if you have to lift your bike into a truck. Putting it on a commuter train or in an elevator is a breeze when pushing the weight of the bike. When in motion and riding the bike the weight is not noticeable. Yes, it helps to have the motor carry it’s own weight which is 8-10 lbs. So very low weight between the motor and battery.

Now that is a fast e-bike at 70 MPH. Our e-bike kits range from 15- 22 mph based on a flat surface with pedal assistance. To stay within legal limits the e-bike can not go faster than 20 MPH on it’s own electric power without pedaling. So Leeds keeps it legal. Some don’t realize that any bike can go quite fast under human power or speeding downhill. That is under natural power and a lot of times speed is blamed on the e-bike.

The e-bike can indeed be ugly but it also can be very discrete. Most e-bikes fall into this category and that’s why people love the electric bicycle kit option. Your bike looks the same with electric power. The electric bike kit only adds a discreet bicycle motor hub, a cable, and a small battery. But we agree with the haters that most electric bikes are indeed ugly…

CAN ONLY RIDE WITH ELECTRIC POWER – Myth #8

Worst part of riding an electric bike: when it runs out of juice and I'm forced to ride manual. Damn tired coz low gear ratio + heavy bike

Worst part of riding an electric bike: when it runs out of juice and I’m forced to ride manual. Damn tired coz low gear ratio + heavy bike

The e-bike can act like a normal bike when the e-bike kit is not engaged. You do have the option to purchase multiple batteries so when one battery runs out of juice you can switch to a fully charged battery. Worse case scenario the user runs out of power and they have to pedal the bicycle as it was meant to be used. Boohoo.

ONLY FOR LAZY PEOPLE – Myth #9

People are coming around to the use of e-bikes. Again, they are such an advantage to those with disabilities or getting up there in age. Our retired customers that have a bit more time on their hands love the e-bike to get them out on their bikes like they are in their twenties again. One gentleman from a retirement community in Florida purchased an e-bike kit and then quickly had all his buddies wanting one too. The boys got to stick together!

We all know cycling is good for you. Now discover the benefits of owning an electric bike: http://t.co/WSdlm21NaP pic.twitter.com/IJlzsEYrZa

We all know cycling is good for you. Now discover the benefits of owning an electric bike.

Rode my first electric bike today….stupid, and goes against everything I believe in…but SO MUCH FUCKING FUN

Rode my first electric bike today….stupid, and goes against everything I believe in…but SO MUCH F*****G FUN

Now you know the electric bike battle on Twitter. The better we understand the myths and the reality, the better we can help others join the movement. A movement that is changing transportation around the world, cleaning the environment, and improving people’s health everywhere. The electric bike kit is the best way to remain on the logical side of the argument. It is affordable, keeps your bike a bicycle, and allows you to pedal as you normally would. The e-bike kit makes your commute the smarter commute.