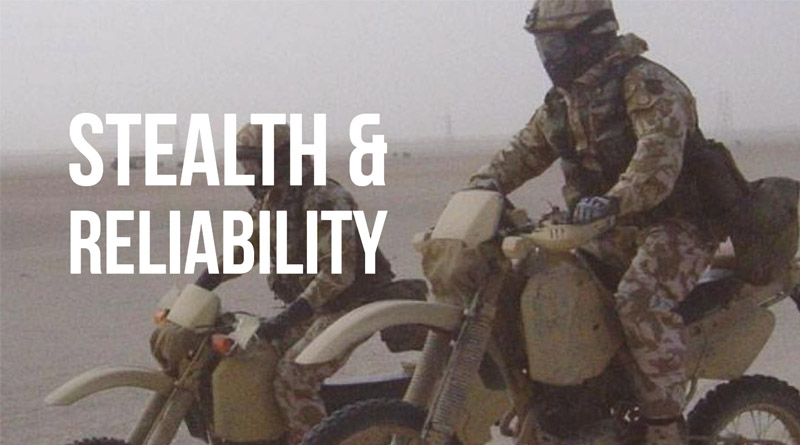 In its quest to defend the borders from those who wish to inflict harm, the U.S. military is always in search of new ways to increase its accuracy and effectiveness. Planning, teamwork and precision are examples of some of the elements that it takes to win an armed conflict, but having vehicles that are stealthy, maneuverable and dependable is also an important factor to consider. Will the electric bike be the solution for the military?

Providing speed and fuel efficiency, military bikes have the potential to become useful vehicles, but they have two significant drawbacks. The gas engines that currently power modern motorcycles are loud and lack reliability. The following information is going to provide a closer look at these problems and how electric bikes can provide a solution.

The best way to combat the enemy is to engage before they know what is going on. Although motorcycles are fast and can access areas that are unavailable to other vehicles, the noise that they emit can alert enemy soldiers to the presence of the U.S. military’s forces. Many people view this risk as being unacceptable because it puts lives in danger. The problem, though, is that deciding where to draw the line is not always easy, and the soldiers who are in the field are the ones who pay the price.

In addition to being dangerously loud, a military bike is not always a reliable means of transportation. When behind enemy lines, the ability of any vehicle to perform as expected can make the difference between success and failure. If a soldier is engaged in combat when his vehicle breaks down, it won’t be difficult for the mission to fail.

No matter the situation, the U.S. military must do everything that it can to protect the troops and to prevent the enemy from gaining the upper hand. With that in mind, the lack of dependability of the modern military bike prevents it from being used to its fullest potential.

The Search For Answers

The Defense Advanced Research Projects Agency, or DARPA, has invested a lot of resources to find a solution that will allow a military bike to be used more often than ever before. DARPA has found a viable answer, and it will keep troops safe as they transport supplies, intelligence, conduct reconnaissance, and more, optimizing the odds of completing the mission.

To make military bikes relevant, DARPA is working on an electric bike project with Logos and LSA Autonomy that offers the same benefits of a standard motorcycle without the drawbacks, and it will change the way soldiers engage the enemy.

Because it does not burn fuel, an electric bike can operate without making a sound. With this level of stealth, the U.S. military can send its troops on operations that would have otherwise been too risky. The DARPA project includes both an electric motor for stealthy operations and a mystery fuel-burning engine for other missions.

Allied forces will be able to move behind enemy lines and return before the opposing forces know what happened. Also, with fewer moving parts, there are fewer components that can malfunction on electric bikes, so these vehicles will be more dependable than once thought possible. No matter the type of mission, the U.S. military’s war fighters will be better equipped and ready to operate behind enemy lines.