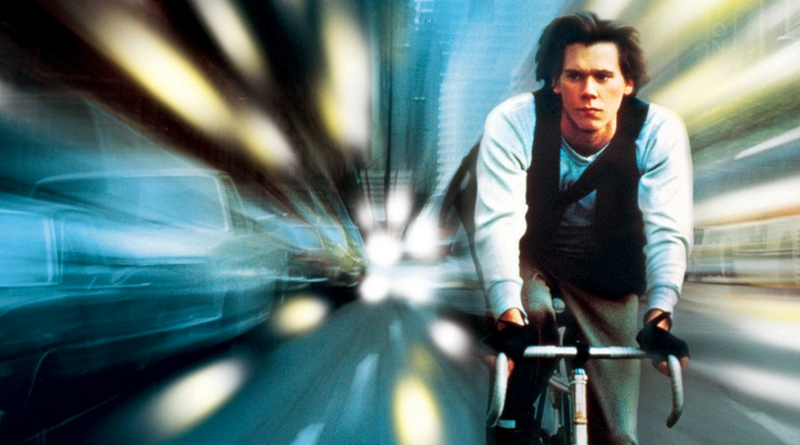 If you love movies as much as I do – I LOVE MOVIES – and if you love bikes – I LOVE BIKES – then you should mix the two and sit down with friends or family and enjoy the two together. When I was living in the Army barracks, I had my bike on a cycle ops trainer and would ride for three to four hours a few times a week, getting ready for the next long-distance triathlon. It was dinner, a movie, and my bike. War movies and dramas were great, but there was nothing quite like riding my bike while watching a good bike movie. The two just go together like PB & J. So here are my old-school favorites. 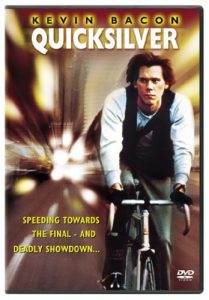 This is the cool kind of Kevin Bacon, riding-a-single-speed-without-a-helmet kind of cool. Jack Casey (Kevin Bacon) is a young floor trader who loses all of his company’s and family’s savings on a risky business decision. Deflated and disenchanted with his profession, he quits his job and becomes a bicycle messenger. Casey has to deal with his parents and his girlfriend, who are disappointed with his new job. Along with the colorful characters that work with him, he saves a troubled young woman named Terri (Jami Gertz) from a gang.

Although frustrated, Casey enjoys the freedom that comes with his lower responsibility. He also uses his education and business acumen to help his co-workers. When some of them are involved in dangerous or difficult matters, Casey must decide whether he should become involved. Those matters lead to a sinister web of murder and intrigue.

Casey later makes a killing on the stock market, restoring his family’s fortune and securing his friends’ financial future. This is a story of redemption and rising out of the ashes that is sure to make you want to ride a single-speed city cruiser with long hair, because that is how we rolled in the 80’s.

Interesting Bike Movie Facts: Kevin Bacon’s bicycle is a single-speed ’84 Raleigh Competition. While no differentiation is made in the film, at least three different configurations are seen on Bacon’s bike during the movie: fixed-gear, single-speed, and outfitted with 0-degree trick forks during various scenes in Bacon’s apartment. A possible freewheel is suggested early in the film when Bacon dismounts while in motion and a distinct clicking sound is heard until the bike stops moving. 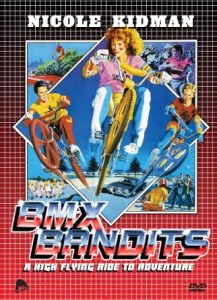 A classic 80’s BMX movie full of stunts, clichés, one-liners and impressive BMX riding, this film is perfect for anyone wanting a trip down memory lane, but it might be a little awkward at times. Don’t say I didn’t warn you. The plot involves three young BMX enthusiasts who stumble across a set of walkie-talkies which – unbeknown to them – belong to a gang of bank robbers. So typical, right? The youngsters take the walkie-talkies, but when the robbers find out, they set out to recover them at any cost. As the hunt for the walkie-talkies goes on, there’s lots of action-packed chases with the kids on their BMXs riding rings around the villains. This is a cheesy film, great for anyone who wants to imagine picking up a BMX bike and riding freely, while creating a bit of havoc along the way. Perfect Sunday afternoon viewing for the whole family.

Interesting Bike Movie Fact: This film stars a 15-year-old Nicole Kidman in one of her very first major acting gigs. 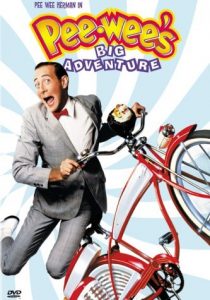 You’re probably saying, “You can’t be serious?” No, but neither was Pee-wee Herman. But this was and is a great, weird film about a boy and his bike with some Pee-wee humor in it. This was before Pee-wee’s odd movie theater event which landed him in jail.

Pee-wee Herman (Paul Reubens), an eccentric child-like man, loves his red bicycle and will not sell it to his envious neighbor, Francis (Mark Holton). While Pee-wee visits his friend Dottie (Elizabeth Daily), the bike is stolen. Thinking his bike is at the Alamo, Pee-wee sets off on a trip, where he meets many remarkable people, including waitress Simone (Diane Salinger) and a motorcycle gang. Eventually, Pee-wee discovers that his bike is being used in a movie and tries to recover it. 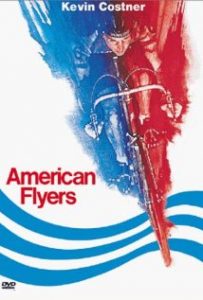 This is Rocky Mountain cycling at its best. If you haven’t taken on a few mountain climbs in your day, then live vicariously through Kevin Costner. The rest of us will be nostalgic for the days of climbing as we watch the film. Written by Steve Tesich, the creator of another cycling movie, 1979’s Breaking Away, American Flyers stars Kevin Costner and David Marshall Grant as estranged brothers who decide to take on the ‘Hell of the West’, the most difficult bike race in the country. Set in the Colorado Rockies with mountain and prairie backdrops, the brothers compete against the world’s top cyclists on a gruelling course at neck-breaking speeds. Featuring actual footage taken from the famous Coors International Bicycle Classic, held in Colorado, there are some great views of the Rockies and an insight into the tactics of bike racing. American Flyers is a feelgood film with a great mix of action, romance, laughter and tears. Hopefully, not your tears.

Interesting Bike Movie Facts: Five time Tour de France winner, Eddy Merckx, makes a brief appearance. The 7-Eleven team featured in the film was a real-life team that competed in the Tour in the 1980’s. 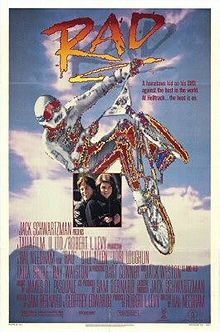 Okay, so it’s the cheesiest BMX movie possibly ever made, but to some of us (or just me) it was the coolest movie as a kid. I’d build paper BMX courses and ride my fingers through the jumps pretending I was rad. This is a great trip down memory lane for those who grew up in the 80’s. The film’s story focuses on Cru Jones (Bill Allen), a young BMX racer who lives in a small town with his mother (Talia Shire) and sister. Cru is faced with a tough decision: the qualifying races for Helltrack are the same day as his SATs, which he must take in order to attend college. However, winning Helltrack means a lucrative sponsorship deal and fame. Cru chooses the latter option, ignoring his mother’s wishes.

The Helltrack race is endorsed by the city, and a duplicitous Duke Best (Jack Weston), president of The Federation of American Bicyclists and owner of Mongoose bicycles. Best keeps adjusting the rules in order to keep Cru out of the race and to ensure BMX star, Bart Taylor (1984 Olympic gymnastics champion Bart Conner), has an easy road to victory, thus providing a financial windfall for Mongoose Racing, Bart’s sponsor.

Racers from all around come to the small town for the Helltrack, and Cru meets Christian Holland (Lori Loughlin), who becomes Cru’s romantic interest. Christian and Cru meet at the local high school dance where, instead of dancing like the other couples, they perform freestyle bike stunts on the dance floor to the awe of many. After being blocked from the race due to a last-minute rule change on participant sponsorship, Cru is ready to give up his dreams of winning Helltrack, until his younger sister Wesley gives him a shirt to wear at Helltrack reading “Cru is… RAD.” Cru and his friends then come up with an idea for him to still enter the race. Using the $10,000 Cru won from qualifying, they start up “Rad Racing,” a small t-shirt business. However, days before the race, Best changes the rules yet again, claiming any company sponsoring a racer must be worth $50,000. When the townspeople hear about this, they rally around Cru and his friends. With their contributions, along with a generous donation from a wealthy local, Mr. Timmer (Ray Walston), Rad Racing comes up with enough money. Jones is finally able to enter Helltrack.

During Helltrack, Duke Best gets the Reynolds twins to try to take out Cru, to no avail. In the final lap, Bart, who leads the race, slows down so that he and Cru can face each other one-on-one in the final stretch. Cru ultimately wins Helltrack, and Bart Taylor is kicked off the Mongoose team. In the final scene, Cru offers Taylor a spot in Rad Racing.

Interesting Bike Movie Facts: The film was released on pan-and-scan VHS and LaserDisc in 1986, where the classic BMX movie quickly found a following and became a top-ten video rental for two years after its release. The film has a 0% and 96% rating on Rotten Tomatoes by film critics and fans.

Beyond the Silver Screen

Does reading about these films make you want to get back out there and ride? Or maybe they just make you realize how much you want a bike upgrade? Whether you want to cruise through the city streets like Bacon on your daily commute or you want to enjoy the mountain trails on your bike like Costner and his team, Leeds Bikes has an option for you.